On a mission: $12 million state appropriation earmarked for Jordan's syndrome

It started with one dad’s quest to help his daughter, Jordan, who began missing major developmental milestones and showed signs of autism spectrum disorder before age 1. It wasn’t until her whole genome was mapped in 2014 at age 9 that they found the cause: a random mutation of a single nucleotide in Jordan’s DNA.

Today, 64 children – and counting – have been diagnosed with a variant of the same genetic mutation. Their family members have banded together on Facebook and with a core group of top scientists to seek a treatment and, ultimately, a cure.

Single-gene defect with a broad impact

The condition, known as Jordan’s syndrome, is named after Jordan Lang, the first child diagnosed in the U.S. Through Jordan’s Guardian Angels, the foundation established by her parents, Joe and Cynthia Lang, an international team of clinicians and scientists have been collaborating on research since 2017 to learn all that they can about the mutation, called PPP2R5D, which caused Jordan’s neurodevelopmental disorder, including autism, intellectual disabilities, behavioral challenges and seizures. It also has been linked with Alzheimer’s disease and ovarian cancer. 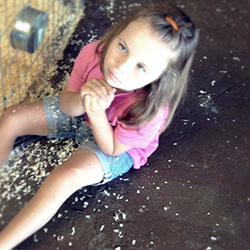 The foundation’s current research was recently bolstered in June when California Governor Jerry Brown signed the 2018-19 state budget, which included a one-time $12 million appropriation for Jordan’s syndrome research. The effort was spearheaded by State Senator Richard Pan, a pediatrician and chair of the Senate Budget and Fiscal Review Subcommittee on Health and Human Services.

According to Jan Nolta, director of the UC Davis Institute for Regenerative Cures, state funding is especially important with the lack of federal funding for large program project grants.

“Right now one team getting a single grant has about an 8 percent chance of being funded by the National Institutes of Health,” Nolta said. “The state funding supports nine teams at multiple institutions who are studying diverse aspects of the disorder, which is like each team getting an NIH grant for two to three years to work full time on Jordan’s syndrome. The impact of the appropriation is tremendous.”

Jordan’s father, Joe Lang, sees it as the way of the future.

“This is how you attack a disease. Putting together a multidisciplinary team so that all of the research is happening at once versus a one-off approach,” he said.

UC Davis Health became involved in Jordan syndrome research in March 2017, after Jordan Lang’s pediatric neurologist heard aneurology grand rounds talk describing the work at the Institute for Regenerative Cures. With the wealth of expertise in stem cell science and neurological disorders, it made sense to make the UC Davis institute the administrative home for the state funds, which will support research conducted in California as well as the other Jordan’s syndrome teams.

“Our plan is to review the discoveries from our consortium’s first year of research and revise our master plan, which had a goal of starting human clinical trials in three-to-four years,” Lang said.

Mice carrying variants of the PPP2R5D mutation found in Jordan’s syndrome children have been bred so the research teams can directly examine the brain and test new treatments. In addition, blood and skin samples of children with Jordan’s syndrome have been manipulated in the laboratory to become pluripotent stem cells, which propagate indefinitely and can be induced to become neurons, or brain cells. Using this brain-in-a-dish model, researchers can assess and test corrections to the genetic mistake and downstream effects in Jordan’s syndrome right in the laboratory.

“In the short term, the plan is to see if any existing drugs already approved by the U.S. Food and Drug Administration may be able to treat the effects of the mutant gene in the laboratory dish, which would be fabulous,” Nolta said. “In the long term, we are using gene editing techniques to find a way to reprogram the cells to ultimately improve the condition and quality of life.”

Kyle Fink, an assistant professor of neurology housed at UC Davis’ Institute for Regenerative Cures, is leading efforts to apply the knowledge and techniques that turn genes on and off, including CRISPR-Cas9 and zinc fingers which can bind to DNA in a very specific manner to regulate gene expression. While the process is fairly quick and easy in a laboratory dish, developing novel delivery systems to get the therapeutics to the brain is more challenging.

“Once we find a treatment that works in patients’ cell samples grown in the lab, we need to get it to the brain, to the right cells and at the appropriate dose,” Fink said. “My lab will be working on how do we reverse the gene’s effects and treat the kids who are suffering.”

With neurodevelopmental disorders, there are critical windows when neurons in the brain grow and develop resulting in normal behaviors and function. But more and more mouse studies are showing that brain cells are not necessarily dying, they are just not functioning right.

“Research has shown that it may be possible to turn a disorder on and off,” Fink said. “Our goal is to find out how we can fix the genetic mistake in Jordan’s syndrome and help kids lead a more normal life.” 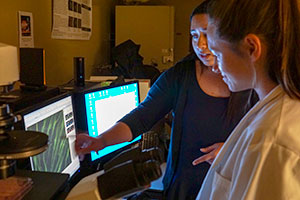 The cutting-edge work wouldn’t be possible without the commitment of the families and the strong teams of specialists that Joe Lang assembled who collaborate on Jordan’s syndrome and share unique perspectives as the research advances.

“As researchers, we can follow our hearts,” Nolta said. “We met Joe and started learning about this disorder and were very touched by it and the children. It’s also such an interesting gene. It is a key mediator of many functions, playing a role in ovarian cancer, the tangles in Alzheimer’s disease and autism.”

The researchers believe that learning how to modify the gene in Jordan’s syndrome will have implications for these disorders, which affect many people worldwide.

“From a dad’s point-of-view, if Jordan improves 50 percent, it’s amazing, and the potential for other children who are younger is tremendous,” Joe Lang said.