Back in the saddle again

For Mike Stevens, cycling and softball seasons never start too early and hunting season is never long enough. Those were among the reasons he refused to let a diagnosis of prostate cancer intimidate him or slow him down too much.

Prostate cancer is one of the most-common cancers affecting men. When tests showing a rising PSA (prostate-specific antigen) level indicated the likelihood that Stevens had cancer, he decided to become more aggressive than the disease itself. The 57-year-old Chico resident immediately began doing research to find out all of his possible options, and how different treatments would affect him physically.

“Because of blood loss and slow recovery times with the traditional “open” surgery, I knew that wasn’t the route I wanted to take,” says Stevens. “I also didn’t want to lose any nerve endings or feelings. And I was determined to be in shape for the start of softball season, and be able to get back on my bike as soon as possible.”

What Stevens had in mind was minimally invasive surgery that would allow him to return to normal activities quickly. With a referral from his primary care physician, he met in Sacramento with UC Davis specialist Christopher Evans, professor and chair of urology and an experienced surgeon. The pair discussed treatment options, including radiotherapy and the different types of surgery to remove the cancerous prostate. Stevens chose a robotic-assisted prostatectomy, after Evans explained how the minimally invasive surgical system worked and what it offered in terms of meeting Stevens’ goals.

Stevens had his surgery on a mid-January morning, and he was up and walking the next day. He felt almost fully back to normal by early April, with all the strength and comfort he needed to get back on his bike for long rides and back on the softball field in time for the season to begin. It was just what he had planned and hoped for.

“Would I recommend robotic surgery for prostate cancer? Absolutely,” says Stevens, who also emphasizes the importance of regular prostate cancer testing to help detect the disease before it has a chance to advance too far. “I wanted a fast recovery without blood loss or damage to nerve endings. I was able to ride over 400 miles on my bike within months after surgery, so I’d say it worked real well.” 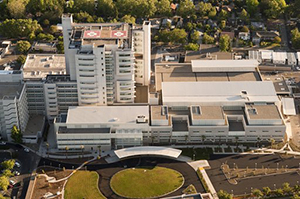 UC Davis ranks among the top medical schools in the nation

UC Davis ranks among the nation’s top medical schools and is a regional resource for training surgeons, nurses and other health-care professionals. At the UC Davis Center for Virtual Care, sophisticated simulation training tools create a virtual hospital that is ideal for practicing surgical procedures, including minimally invasive techniques such as laparoscopy and robotic-assisted surgery.